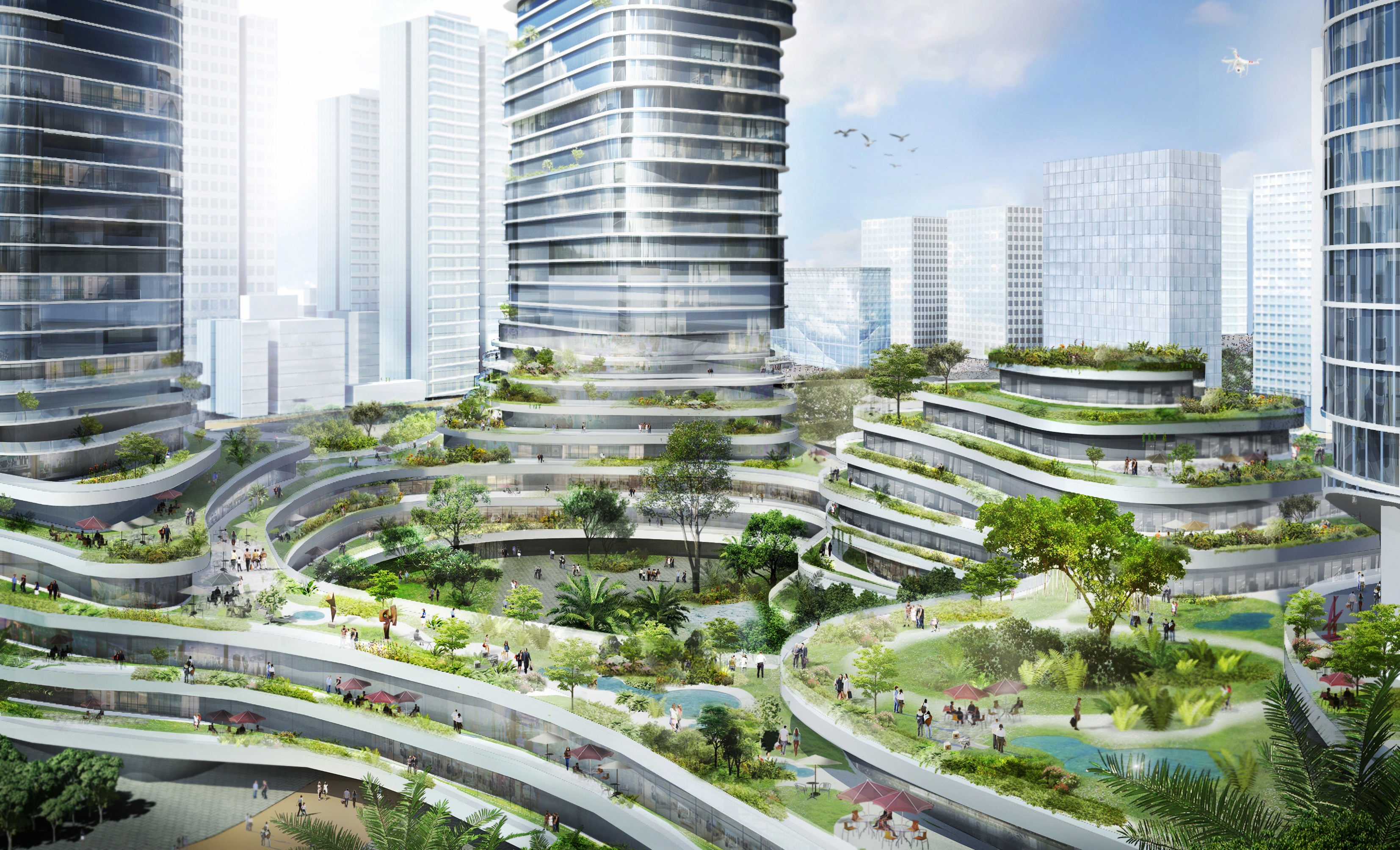 The architect behind some of Asia's most recognizable buildings has unveiled plans for a new skyscraper that he hopes will change the face of Vietnam's largest city. Featuring an observation deck and an urban garden hundreds of feet above the ground, Ole Scheeren's latest project will be built in central Ho Chi Minh City. CNN has been given an exclusive first look at the project.

Named Empire City, the complex forms part of a new development that could transform the once impoverished District 2. At 1093 feet (333 meters), the largest of the three towers, Empire 88 Tower, will become one of Vietnam's tallest buildings upon completion.

But while the structure is likely to stand out from its urban surroundings, it was inspired by Vietnam's geography, Scheeren said. The German architect explained that his design is intended to blend in with its tropical environment.

The building's podium is expected to host water features and a variety of local plant species. Credit: Buro Ole Scheeren

"We want to make the earth touch the sky and vice versa -- to mirror (the) nature on the ground into the sky and create a very lyrical moment for the building," he said in a phone interview. "We're looking at developing a very intense network of public spaces -- on the ground, via the podium, but also lifting part of this urban energy up into the sky.

"(The height) is not that important in itself. But as focal point for this new city I think it can play a very important role. The idea is to not make it a marker (or) a silhouette on the skyline, but really to create a place for people to go."

Located on a peninsula in the Saigon River, Empire City will comprise residential, commercial and public spaces. Current plans also envisage a hotel and co-working spaces, as well as outdoor areas for exercising and socializing.

One of the design's most eye-catching features, the so-called "Sky Forest," is an urban garden protruding from the building's upper reaches. The building's podium -- a base from which its three towers emerge -- is expected to host water features and an abundance of plant life. 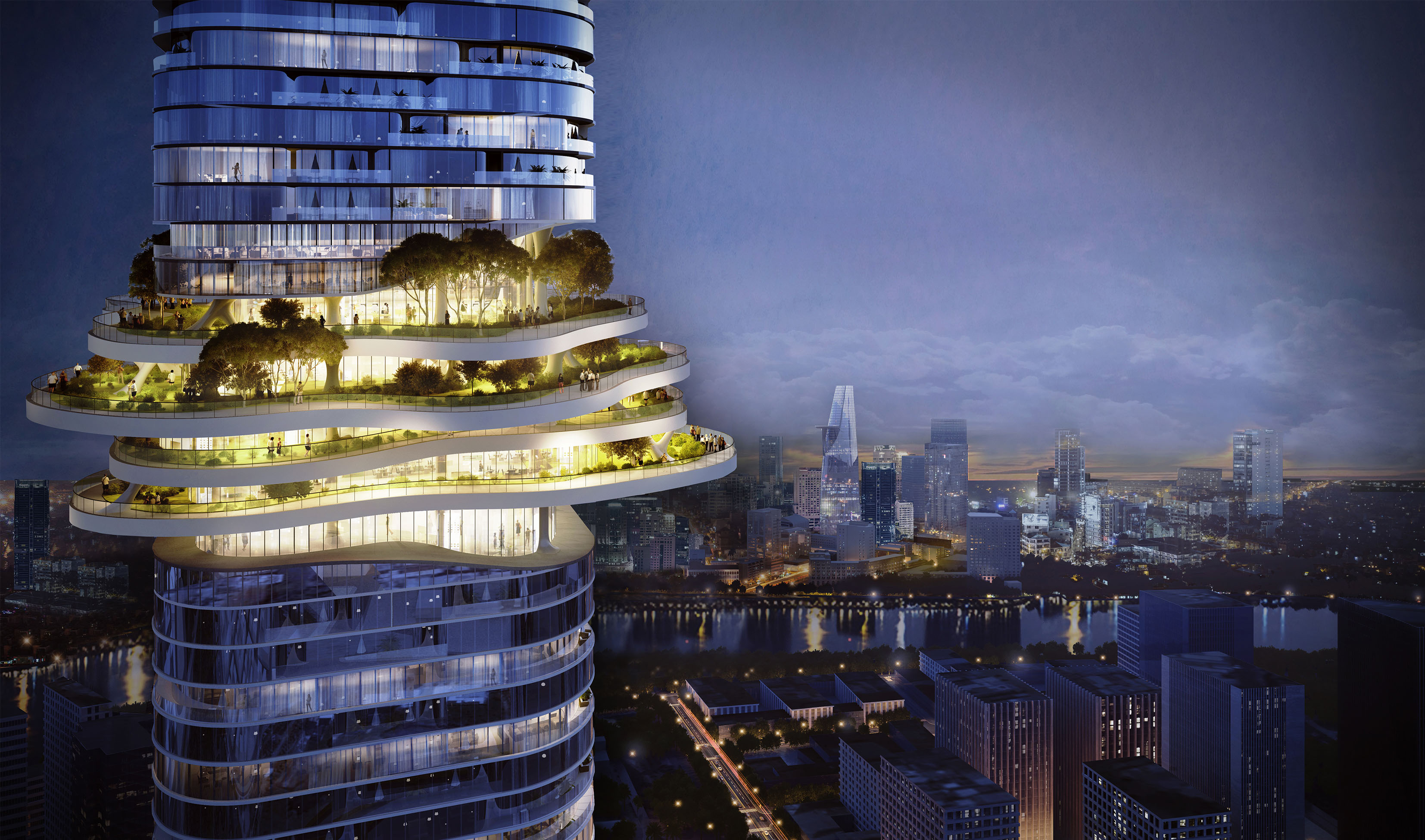 One of the design's most eye-catching features is the "Sky Forest," an urban garden protruding from the building's upper reaches. Credit: Courtesy Buro Ole Scheeren

"If you look at Vietnam's nature it's really incredible," Scheeren said. "It has the power of the tropics that I've loved for a long time. I believe that there's a real opportunity to look at ways in which nature, as living space, can come back into architecture -- where 'green' is not merely a sense of alibi or a discussion of sustainability, but where it's really about ... the quality of living that we can generate."

The building joins a growing list of high-profile "green" projects being announced in Asia, such as Italian architect Stefano Boeri's pollution-eating "Forest City" in southern China. While accepting that the trend is growing, Scheeren said that it's not just a matter of fashion. 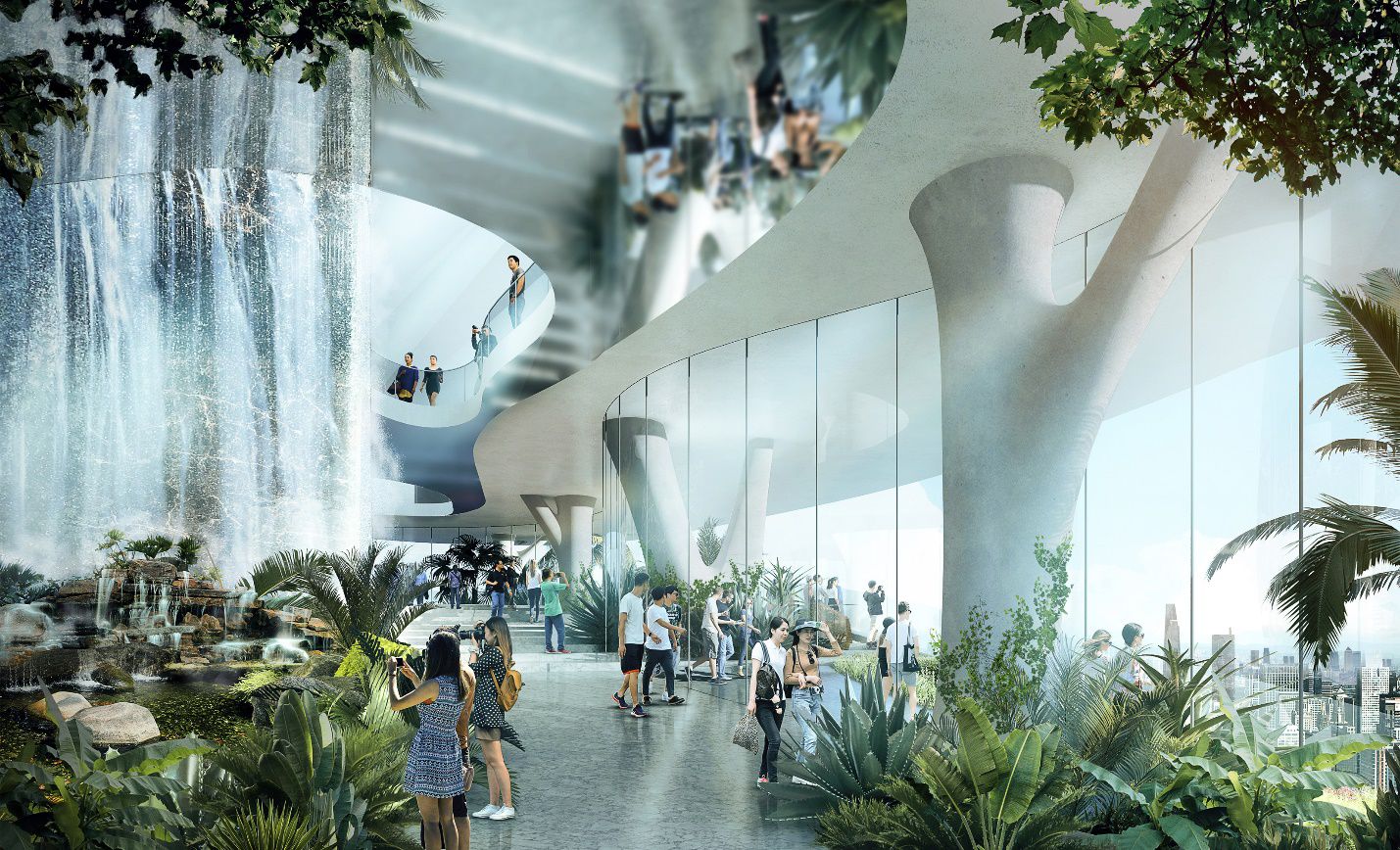 "When architecture falls for fashion then, in most cases, it becomes problematic," he said. "But I think that this is a very pertinent and important topic for us: How we bring the density of the city back to (being) a more liveable environment.

"In that sense, there are certainly some fashionably 'gimmicky' projects that have dealt with (urban gardens) and I don't think there's a lot of future in those. But there are a series of serious attempts to investigate the possibility for this to be a new model. And that's really what we're after."

Having worked in Asia for the last two decades, Scheeren has been responsible for a number of the continent's best-known buildings. As a partner and director of the Office for Metropolitan Architecture (OMA), he designed landmarks such as Beijing's CCTV Headquarters before launching his own firm.

Since founding Büro Ole Scheeren in 2010, the 46-year-old has completed the MahaNakhon, which became Thailand's tallest building upon opening last year, and the Interlace in Singapore, which was named World Building of the Year in 2015. But Empire City marks his first project in Vietnam, a country that he described as having an "incredible energy." 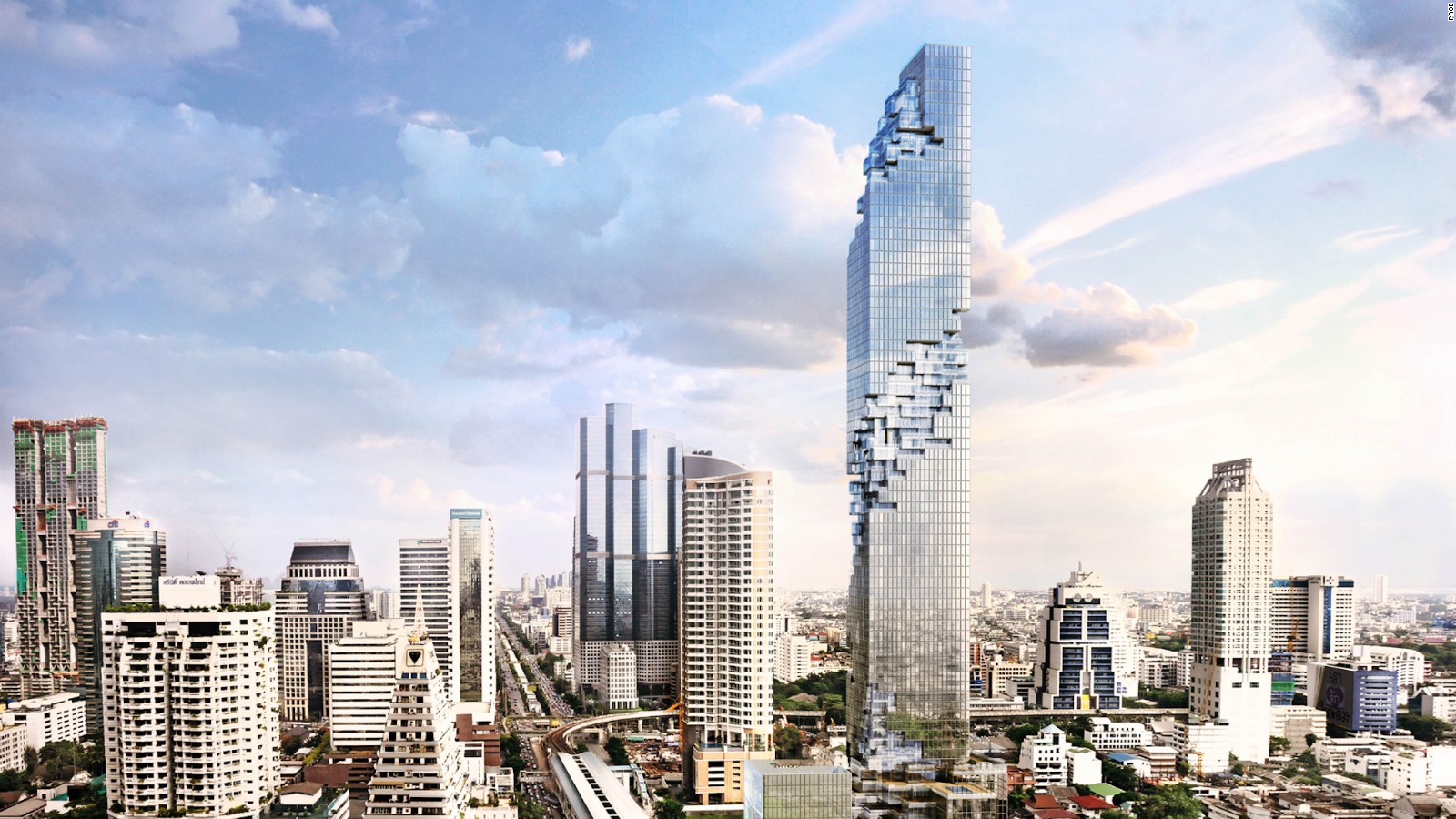 Is this the world's craziest new skyscraper?

"There's an expectation to create new meaning in (Vietnam's) own context -- to look at the growing city as more than a purely economic opportunity," he said of the country's current architectural climate. "(Economics) is certainly part of it, but really there's an ambition to create meaningful places for the city's people, and to create a new identity that can be an arch between their past and their future.

"I don't have this sense of letting go or parting so much, when I design a building," says Scheeren. "I never design it for myself to begin with. I design it for the people that will ultimately own it, or inhabit it or work in it, or live in it." Credit: Iwan Baan

"On a grassroots level, you see an incredible entrepreneurial spirit in the county -- a big start-up culture and even a big co-working culture. All the stuff that we're discussing in the Western world actually thrives intensely in Ho Chin Minh City. I think there's a really great momentum to join, and to see how, through architecture, we can make a contribution."